You are here: Home » News » News & Events » How is a Mass of Instant Noodles Made?

How is a Mass of Instant Noodles Made?

Chinese Instant Noodles Machine refer to either a pre-cooked and dried noodle mass, with flavoring powder and or seasoning oil. The flavoring pack is usually in a separate sachet. Some instant noodles are seal packed and can be reheated or eaten directly from the container. Dried noodle masses are designed to be cooked or soaked in boiling water before consumption, but can be consumed in the dry form. 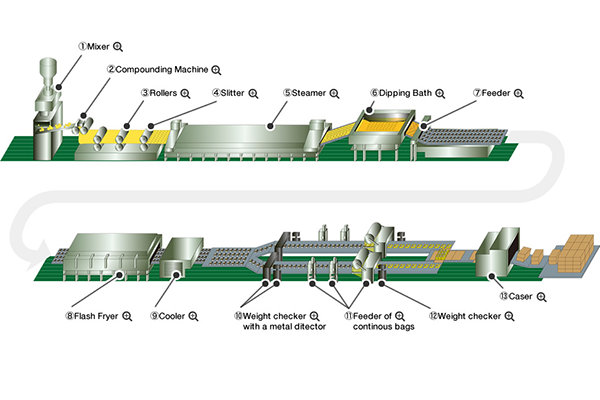 The instant noodles making machine has a feeder system that uses a vacuum conveyor to move the flour to the mixer.

Here, the motor drive gear drives the agitator shaft to carry out the dough mixing preparation; the flour is mixed with the water preparation using an automated continuous mixer.

The dough after previously mixed in the mixer, the motor drives the roller to drive the belt which afterwards convey the dough on the belt and thereafter feed the dough evenly into the compounding machine.

Using the dough conveyor, the dough is conveyed to the compounding machine of the instant noodles making machine which helps at first to press the dough out, after which it makes two pieces from the dough before eventually “compounding” the two pieces into one piece which makes the noodles taste good and chewable.

After the dough is compounded, it is moved to the slitter having a rotating cutter that cuts the dough sheet into a Noodles slitting machine.

With the aid of the multilayer steam box embedded in the instant noodles making machine, the noodle is steamed for 1-5 minutes at 100°C, which enables the starch in the noodle become digestible.

After steaming, the Noodles cutting machine are cut into desired length and shaped by blowing compressed air through the shaped noodles.

The shaped noodles are at first dewatered at 140-160°C, the moisture content is reduced to 3-6% and the starch is further gelatinized.

The noodles are cooled by blowing cool air of lesser temperature through them and afterwards they are sealed and moved through the conveyor belt for proper packaging.