You are here: Home » News » News & Events » How to Personalize Your Instant Noodles at Japanese Ramen Mecca

How to Personalize Your Instant Noodles at Japanese Ramen Mecca

Instant noodles preparation and processing always pass through several stages and these stages require different machines and tools. To personalize instant noodles, there is need to ensure adequate working of all the machines used in making instant noodles. 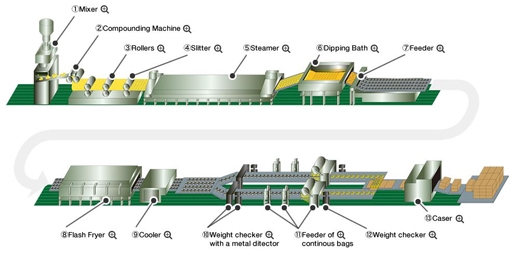 The first stage is the Mixing and kneading stage; This is the process in which a mixing machine is used to stirs up wheat flour and the mixing water. Normally 0.2-0.6kg of the mixing water at a temperature of 25-30˚C is kneaded into the flour for 10-20 minutes. This process gives the dough tectiform tissue that gives rise to noodle’s elasticity.

The next stage is performed using a compounding machine. This stage is known as the Forming noodle belt stage: Here, the dough is put through two rotating rollers, which compounds two noodle belts into one single belt. The role of this stage is to distribute ingredients evenly. Often, the dough is left for a certain period of time to mature.

Rolling stage: This stage is made possible by the machine known as roller. The 10mm-thick noodle belt is pressed with pressing rollers, and it is flattened to a thickness of approximately 2mm. The noodles are passed through more than four pairs of rollers and become thinner gradually. This process strengthens the textiform tissue and provide elasticity to the noodles.

Slitting stage: After the rolling process has been completed, noodles are put into the slitter, where a rolling blade slits the noodle belt into thinner noodles. At this stage most of the instant noodles becomes wavy. Being pressed up and down gently, the noodles cut out by the slitter become wavy. The wavy-shape gives space in between noodles, which prevent the noodles from sticking together. The machine used for doing this is known as slitter.

Steaming of the noodles: Most instant noodles are steamed for 2-6 minutes at 100˚C to pregelatinize the starch of the noodles. This is done by putting the noodles inside a machine known as steamer.

The dehydration stage: Many instant noodles are dehydrated either by oil-frying or drying using air.

For Fried noodles: Noodles in a metal mold go through frying oil of 150-160˚C for one minute or two. The moisture content of 20-40% in the dough is reduced to 3-6%, and there is acceleration of the starch removal process.

Air-dried noodles: Noodles in a metal mold are placed into air-drier and dehydrated using hot air of approximately 90˚C for more than 40 minutes. All these activities take place inside a chamber known as flash fryer.

The Cooling Stage: After the dehydration process has been completed, the noodles, which are already at 100˚C, are cooled with air. This cooling process is followed by a series of careful inspection for weight, shape, color, dryness, frying condition, cooling temperature. The cooling process take place in the cooler.

Packing: Finished noodles are packed into film nylons or into cup-containers together with seasoning and garnish, which then are sealed with aluminum foil lids and distributed for sales through out the world.